One objective of Estonian Tax and Customs Board (ETCB) is to provide simple and convenient services to taxpayers. To achieve this, the ETCB has invested significant amount of resources to enable taxpayers, both companies and natural persons, to submit their tax returns online and communicate with the ETCB via electronic means to the largest extent. As a result of the e-residency program, the online services are also available to non-residents who have applied for government-issued digital identity and run their Estonian company remotely.  All the hard work and investments have paid off and the convenience of declaring taxes as well as the simplicity of Estonian tax system is known worldwide. In addition to aforesaid, this summer the ETCB launched a new e-service which provides the companies with the option to receive an automatic feedback and information about their tax behavior and compliance from the perspective of ETCB – the Tax Behavior Rating (TBR).

To simplify, the TBR enables taxpayer to “sit on the other side of the table” and see itself through the eyes of ETCB. However, as no additional information is requested for the TBR, it is mostly based on the information submitted by the taxpayer itself with regular tax declarations. The tax compliance part of the TBR is based on six data components: tax arrears, declarations, offences, tax proceedings, background of responsible person and average wages. The tax behavior part of the TBR is calculated on the basis of taxable expenses, payments, registrations in the employment register, purchases and sales declared on the VAT return and other observations made by the ETCB.

The information is analyzed and compared with the information submitted by other taxpayers as well as information obtained from public registers. Thereby, the ETCB is able to conclude for example whether the taxpayer could be involved in paying hidden salary, untaxed use of a company cars or undeclared supply. The TBR and underlying data is usually updated once in every 24 hours, except data regarding turnover, paid taxes and number of employees and ratings based on such information which are updated quarterly.

The result of the analysis is displayed in simple combination of numbers and colors from red to green and 1 to 3, whereas the combinations have the following meaning: 1 (red) – there are significant deficiencies, 2 (yellow) – there are some deficiencies and 3 (green) – tax matters are in order. Since the calculations are partly made on the basis of data protected by tax secrecy, the results and recommendations on how to remedy the shortcomings are visible only to the management board members of taxpayer in the e-services system of ETCB.

As the taxpayers are not obliged to use the new e-service, the latest statistic shows that 13% of all potential users, i.e. 20,000 Estonian companies and self-employed persons registered as VAT payers out of 160,000, have so far viewed how their tax matters look from the perspective of ETCB. 61% of those taxpayers were 3 (green), 19% 2 (yellow) and 20% 1 (red). 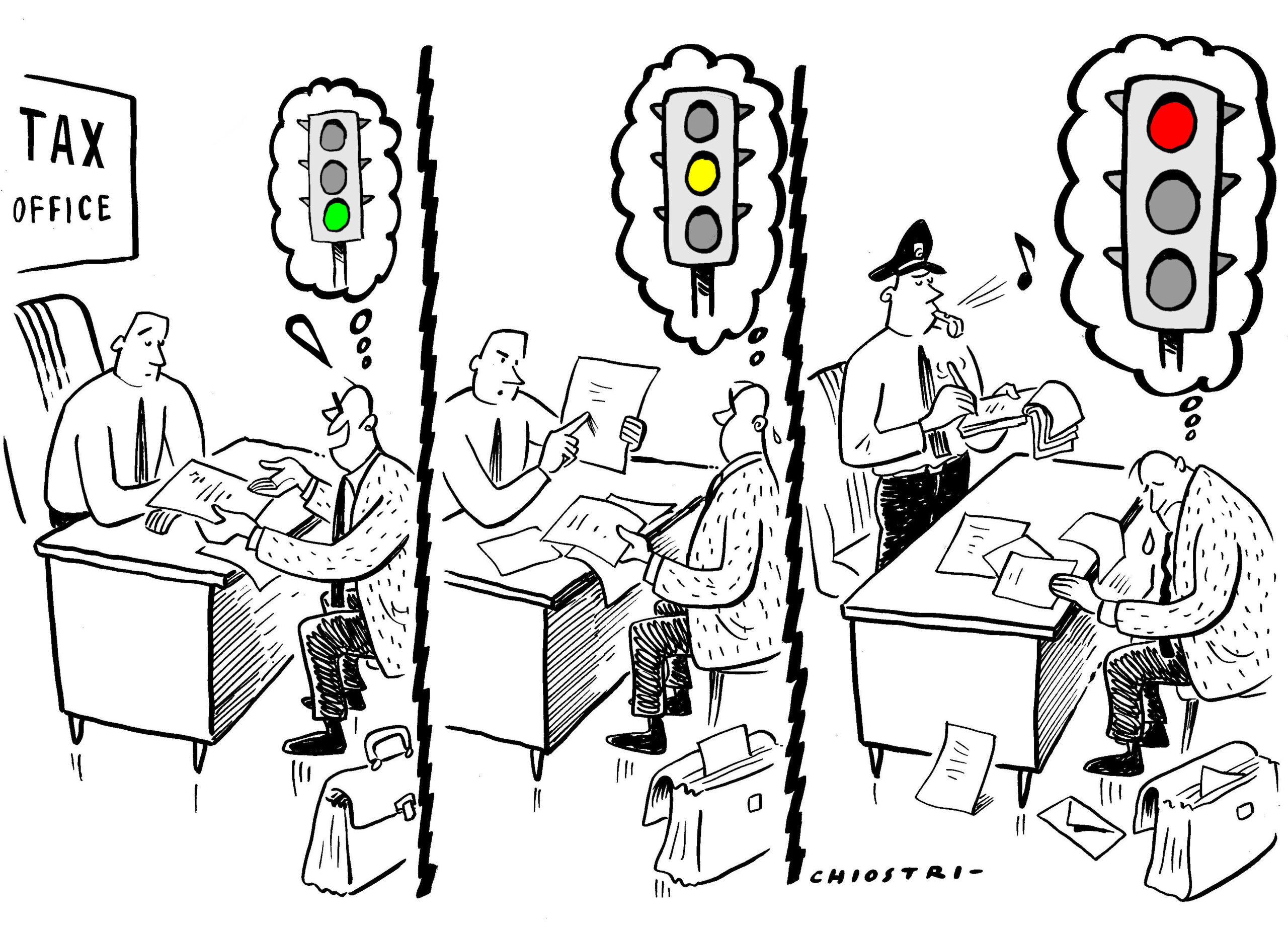 Aim of the Tax Behavior Rating

Regardless of the noble aim of TBR to help taxpayers to keep their tax matters in order and reduce the workload of ETCB, the TBR could also be used, to some extent, for less good purpose – to facilitate abusive tax practice. As the data on the basis of which the TBR is generated is to the large extent submitted by the taxpayer itself, it also makes it possible to manipulate with the outcome. By analyzing the results, impact of new entries and coordinating the submission of data with domestic partners, the taxpayer is in theory able to “keep itself in green”. For example, by making sure that from the perspective of ETCB its salaries meet the average of the sector and thereby the specific tax matter looks “green”, the taxpayer could reduce the risk of an investigation regarding its actual salaries and risk of being caught for paying a hidden salary. Or by carefully analyzing the TBR, the taxpayer could determine whether information about its undeclared transactions has reached to the ETCB or not. In other words, presenting itself to the ETCB as a model-taxpayer and reducing therefore significantly the risk of any inquiries and tax audits triggered by inconsistencies of submitted data, the taxpayers could be more successful in abusing the tax system.

In reality, however, those carefully planned arrangements would presumably not provide the desired result. In best case scenario such coordinated and well-considered submission of data would only postpone the inquiries regarding any questionable tax structure or transaction. There is no guarantee that the model-taxpayer rating would result in no inquiries or tax audits in the future. The TBR is aimed to reduce the inquires and tax audits typically triggered by shortcomings which taxpayer would probably rectify itself once notified (e.g. the employee receiving the payment has not been registered in the employment register, deficiencies in submitted declarations etc.). The TBR is not aiming to provide any assurance nor issue binding opinions regarding the tax matters of specific taxpayer. Taking into consideration also the fact that abusive tax schemes typically involve several jurisdictions and multiple taxpayers, having a model-taxpayer rating in Estonia has a little impact in the context of exchange of information and administrative co-operation. Once the partner in other jurisdiction raises a red flag with its transactions related to Estonian taxpayer, the ETCB would undoubtedly take another look of the tax matters of such taxpayer.

Despite the possibility of using the TBR for the purposes of abusive tax practices, it is still an outstanding example of co-operation and trust between tax authorities and taxpayers. There will always be some taxpayers trying to push the boundaries and testing new, more beneficial approaches in tax matters but that should not hinder the application of digitalization and automatic data processing in the field of taxation.